Update: I linked some parts to my previous posts on Augmented Scale ideas.

Over at the All About Jazz forum, someone asked for suggestions about how to approach Maj7#5 chords. As this is a sound I'm fond of and have spent considerable time exploring, I posted a rather lengthy response.
I'm reprinting part of my response here, since I think it may be of general interest. It's somewhat off the cuff, so the information is probably not optimally organized, so apologies in advance.

Maj7#5 can take some different sounds, depending on context. Lydian Augmented (third mode of melodic minor) is one of the scales most commonly recommended as being compatible with a Maj7#5 chord. It's not the only one, though, and others might work much better, depending on the context.

Here are some other possibilities: 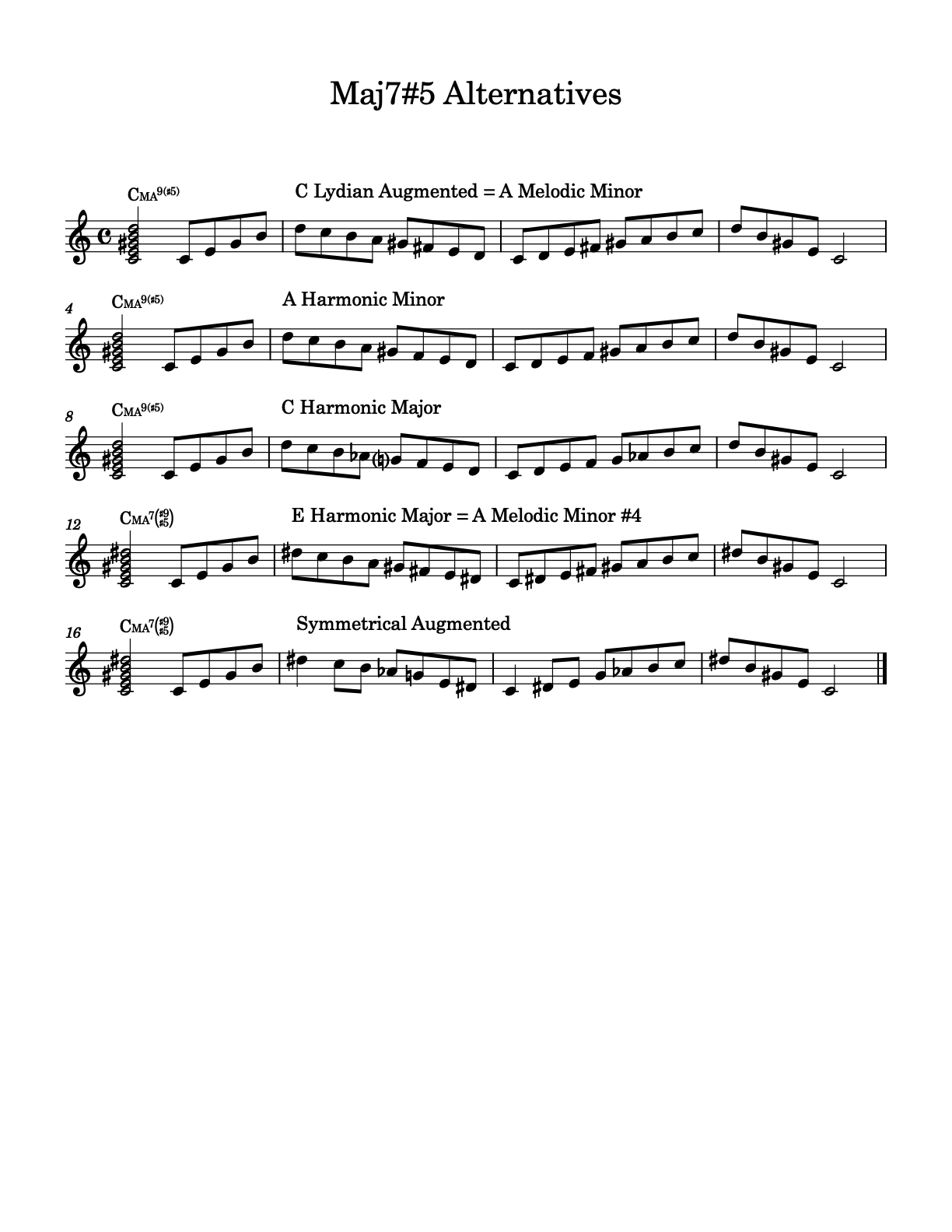 What notes will work best over the chord will depend greatly on the harmonic context, e.g. the preceding and following chords, etc.

Try finding some tunes that have the sound in it, substituting it in standards, or writing your own, to experiment with different contexts.

You can also extend each triad into a maj7 arpeggio:
Cmaj7, Emaj7, Abmaj7

Or you could construct arpeggios by combining the triad pairs into polychords:


You can also reconsider the scale as a major and minor triad a m6 apart:

There are a million ways to practice these.

Triads in the Augmented Scale

Of all the different scale choices over Maj7#5, two particular areas tend to stand out for me:

Since these involve half-steps above the determining color tones of the chord, care must be taken with the melodic resolution tendencies.

1. Lydian Augmented: has #4 and M6. The #4 implies a Lydian sound and can be a sustained tension, but the dissonance of the M6 obscures the harmony and must be used carefully

2. Harmonic Minor, 3rd mode (Ionian #5): Has P4 and M6, both of which can obscure the harmony and require careful use.

Since #5 omits the problematic tones, it may be an easier scale to start with: it is less likely to lead to obvious clams.

One could create another 6-note scale that leaves out both P4, A4 and M6:
C D E G Ab B. Such a scale might be useful. It could be viewed as a C+/G triad pair or (perhaps less usefully) as a C/Abdim triad pair.

The last one includes a b9 on the chord, but this can be a great sound on a modern tune, especially if the chord lasts for a measure or more. It usually works better in the upper register, where it sounds like an extension.
__________________


So there end up being four primary 7-note scale and one 6-note scale possibilities, and a number of pentatonic and hexatonic choices. Here again are the five primary types:

Not all choices work equally well in all situations.
No warranty is expressed or implied; indiscriminate scale usage may result in clams, tomatoes, or acts of violence. I do not take responsibility for the careless use of the above information.