This is a lovely piece by Anouar Brahem, one he has rarely performed.  The main recording available is Thimar, with Dave Holland and John Surman.

This album was my first experience with Brahem's music; it came out in 1998, right after I had decided to start learning the oud. I had recently graduated from music school in New Orleans, where I had earned my degree in jazz studies on guitar.  Those four years of studying jazz and classical theory and performance were pretty intense, and with my newfound freedom to focus on whatever I wanted, the magnetic pull of the oud drew me in.  Recordings of jazz musicians with the oud, like Ahmed Abdul-Malik's Jazz Sahara and Rabih Abou-Khalil's Blue Camel had been staples of my listening for some time, and the sound of the instrument resonated deeply with me.   At that time, with no Google, no YouTube, no online music stores, it was like finding a needle in a haystack searching out oud music to listen to.   I'd go to Mona's Lebanese Grocery store and buy whatever cassettes had an oud on the cover.   I don't recall how I came across Thimar, but it was likely methodically perusing the shelves of CDs at Tower Records on N. Peters Street (now an Urban Outfitters, in case you were wondering). Regardless, when I got home and put it on, I was transfixed, and it became part of my deep listening for years. Incidentally, fellow oud player Kane Mathis had a great blog post about the abundance of listening options these days and the tension between listening deeply and widely, I recommend reading it: http://www.kanemathis.com/blog/2021/2/20/endless-options-and-the-listening-mind

I learned a several pieces from this album at the time. Qurb was one that was a bit elusive, I could more or less play it along with the recording, but was puzzled about several  aspects. With no percussion, they perform it quite loosely, and there are some parts where it seems a beat is dropped or added.  While the basic beat is Sama'i Thaqil, the bass doesn't really follow the iqa' (sometimes not even playing on beat one), and the overall rhythmic interpretation is somewhat rubato.  I had done a transcription some years ago that I had posted previously, but I recently discovered a live recording that (while still freely interpreted) clarified some of the intent.

The resulting sheet music still an edited version, since neither of the two versions is completely clear or consistent with one another, but I think this is a pretty good version of the 'essence' of the composition. I've added chord symbols to reflect what the bass is doing; though neither version has a harmony instrument, these seem to be the chords that are implied.  The bass lines on the recordings are also pretty improvisatory, and the changes don't always line up exactly in the noted rhythmic positions.

Overall, this is in some ways one of his most "classical" compositions, and the variety in interpretation is nicely consistent with the aural tradition of old Arabic music, in which different performances might have substantially different choices. Formally, it seems partly inspired by the Bashraf, particularly the Tunisian Bashraf Sama'i. 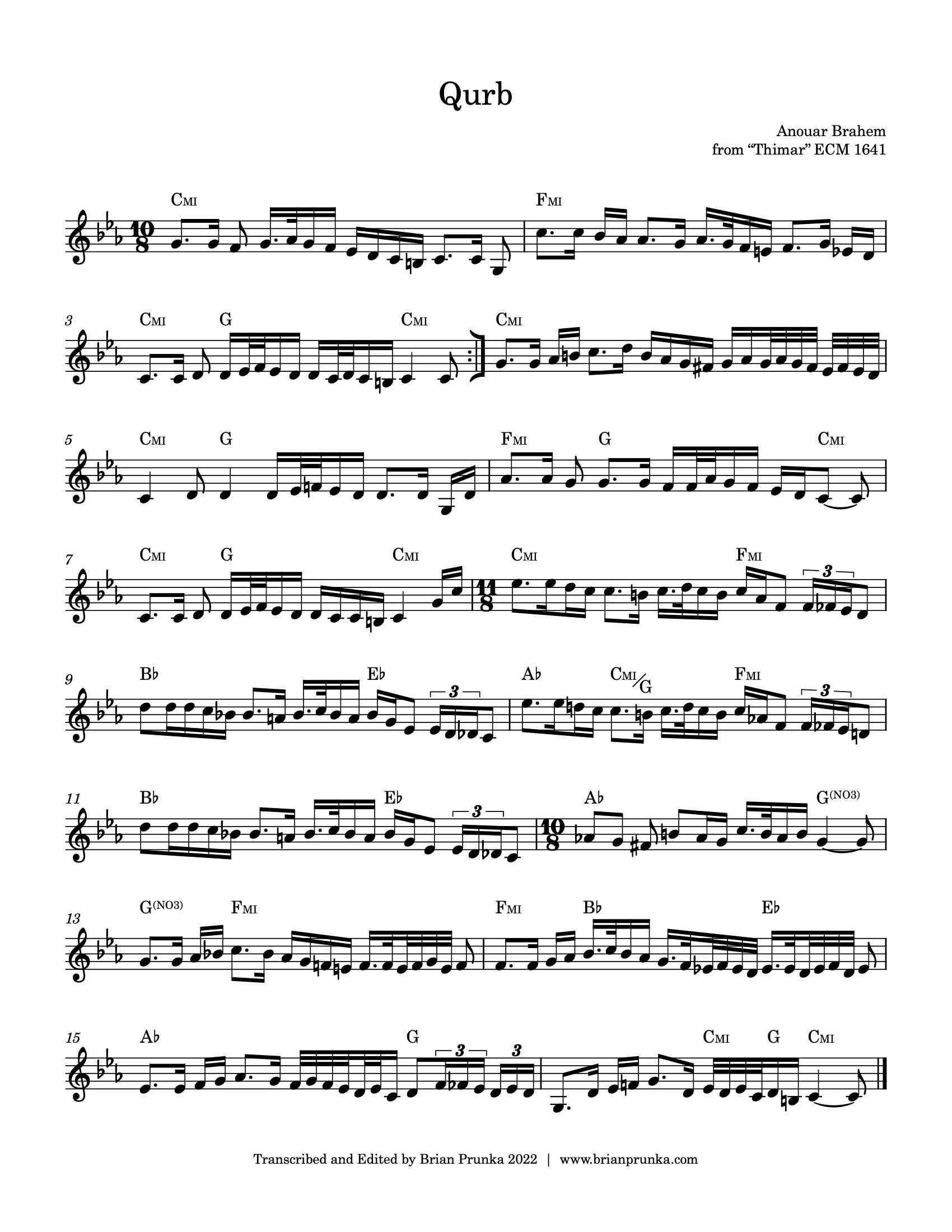 The phrase in m.6 ends on beat 9, instead of the usual beat 8.  I wondered if this was a mistake, but it was similar in both recordings, so I'm leaving it as is.  This is one spot where I'd really like to see what Brahem originally wrote.