This is a sound that (if memory serves) I first noticed when transcribing John Coltrane's solo on "I Hear A Rhapsody" from his 1957 album "Lush Life."  I don't think I've ever come across anyone discussing this particular scale, so I refer  to it as "Whole-Tone Pentatonic," because that's how I think of it: a pentatonic scale with a whole-tone sound.  I was recently reminded of this while learning Coltrane's solo on "Mr. P.C." (from Giant Steps).

I've always been simultaneously intrigued by the whole-tone scale and somewhat mystified by its apparent musical "sameness."  This is possibly partly because one of the first jazz musicians who really fascinated me was Thelonious Monk, well-known for his use of the whole-tone scale.  And it's probably no coincidence that John Coltrane played with Monk at a formative stage in his development.  And yet, the whole-tone scale is not usually explored or developed as much as other sounds (at least in my experience), and treated more as a special effect or one-off sound to be used occasionally.   I touched on ways to expand its use a little previously in this old post, but this pentatonic really opens up some different possibilities.

From a theory standpoint, the Whole-Tone Pentatonic scale is obviously just a whole-tone scale (normally hexatonic, i.e. six notes) with one note missing.

I find the results of omitting notes from scales, particularly symmetrical scales, to often be interesting.  In this regard, the Whole-Tone Pentatonic does not disappoint—it has some interesting properties.  Obviously, the pentatonic is no longer symmetrical, which in my opinion generally makes scales more interesting and less patterned-sounding.  But more  intriguingly, the gap results in a scale that is not only a subset of the whole-tone scale, but also a subset of the melodic minor (aka jazz minor) scale.

I made a Venn diagram to illustrate the overlap: 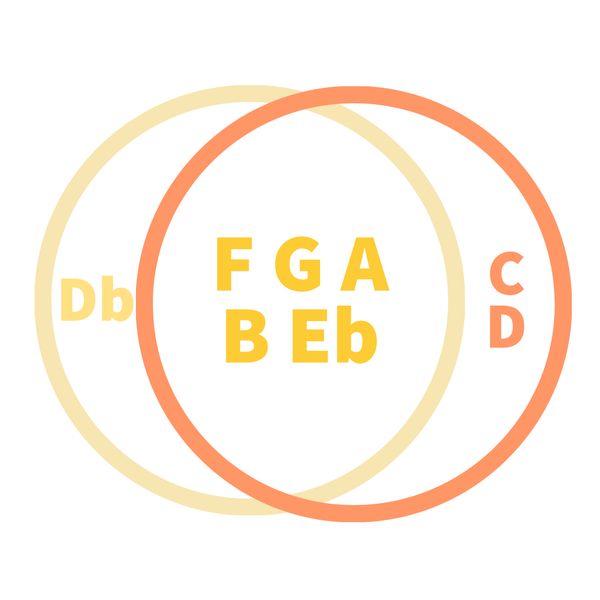 Below in standard notation: 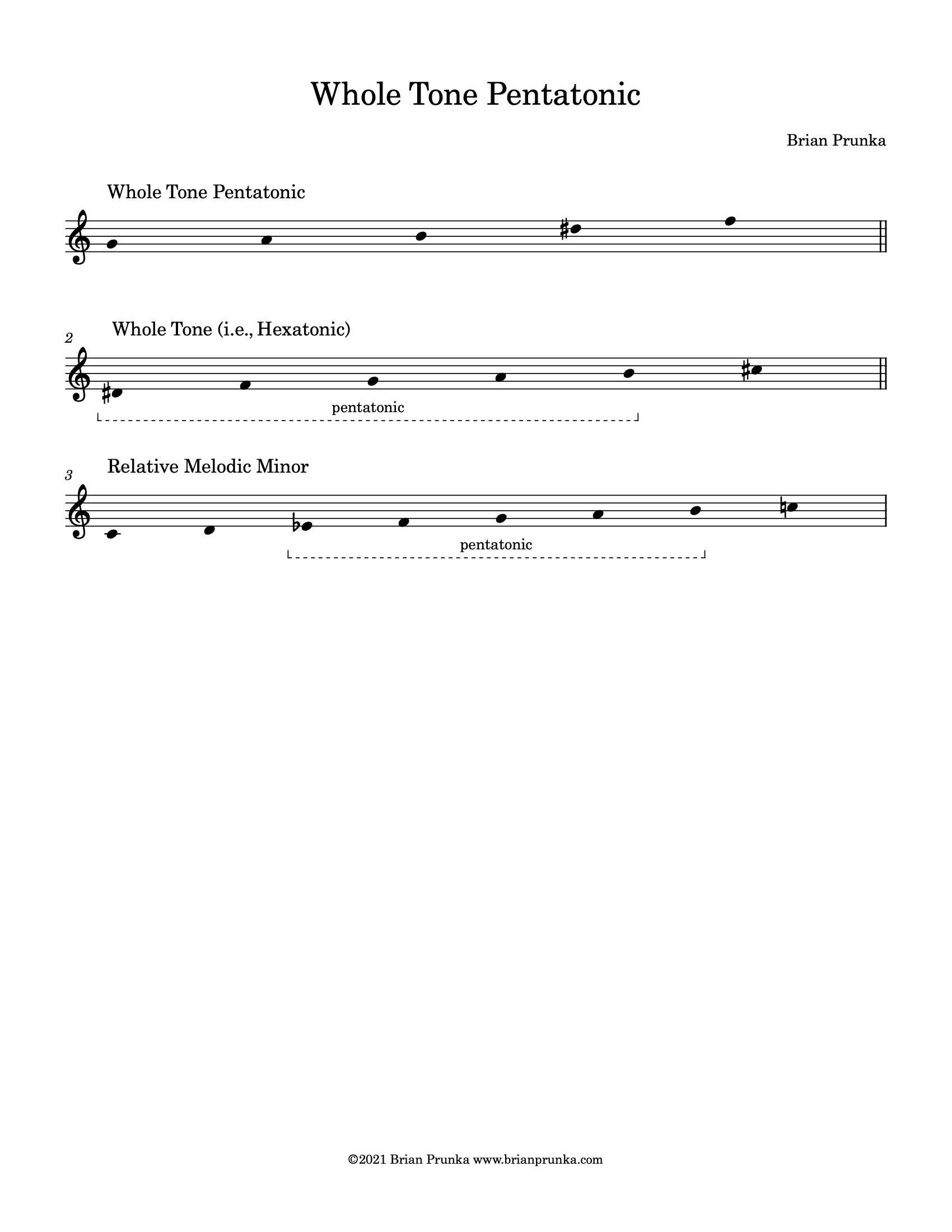 This means that this can be used anywhere you would use a C melodic minor scale.  Coltrane mostly uses it over tonic minor (e.g., Cm6) or over V7 (e.g., G9#5). But it has some other possibilities, notably Lydian Dominant sounds (e.g., F9#11) or altered dominant sounds (e.g., B7alt).

To get used to this, I like to practice alternating between the whole-tone pentatonic, arpeggios of the relevant chord, and the relative melodic minor scale.  I've made a few simplified examples below. 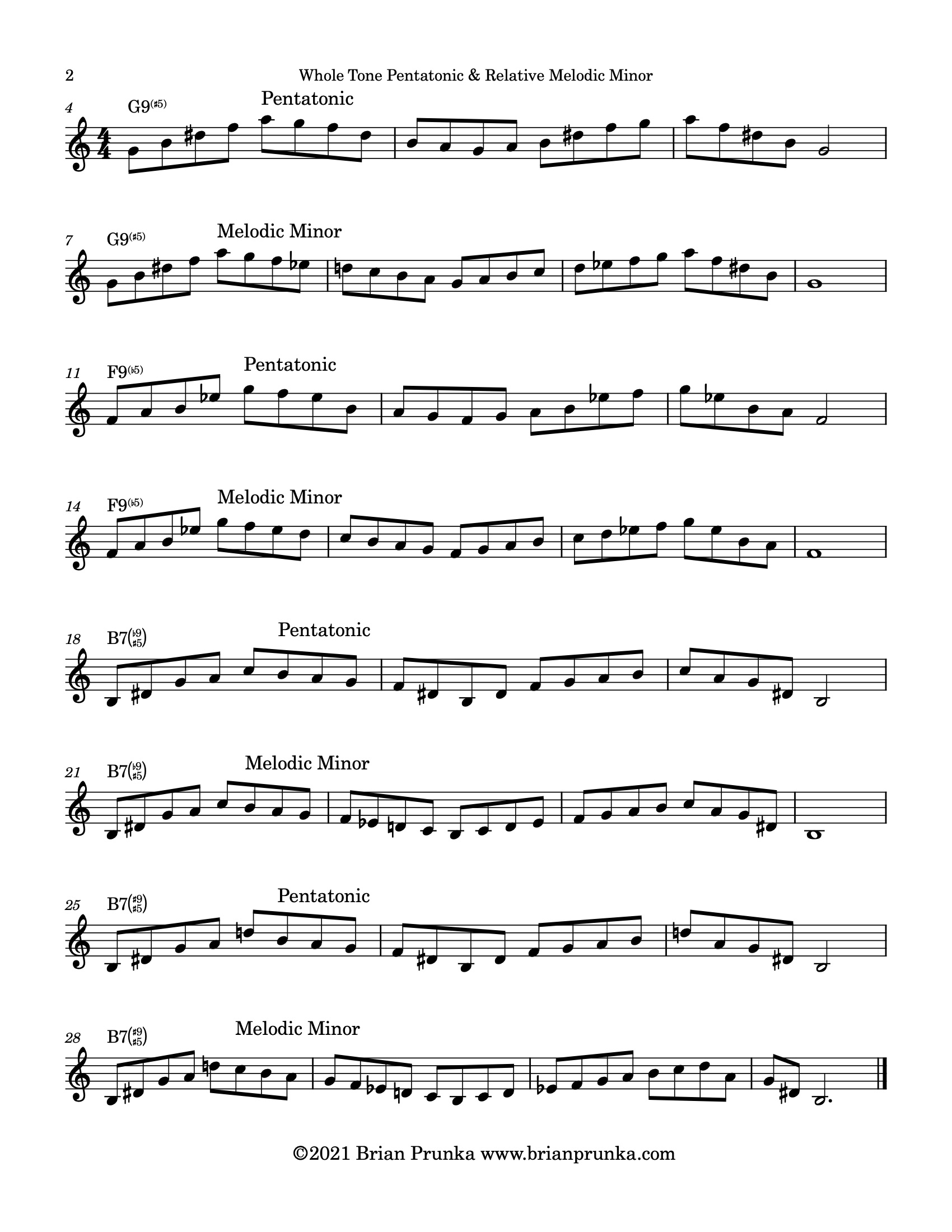